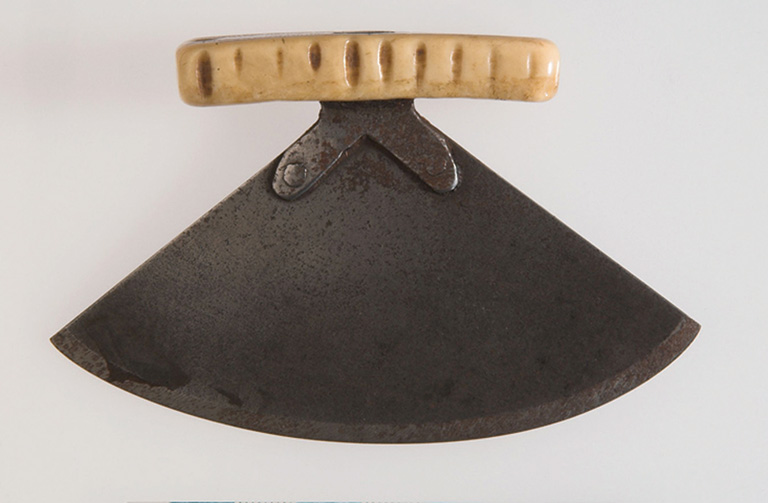 Have you ever seen an Ulu knife? Did you know that it was designed 5000 years ago, but managed to stay in use up to this day?

In the following sections, we’ll explore further who created it, what it was used for, and why it’s still popular worldwide.

Before dive into more details read our review article on the top 10 best ulu knives.

The Ulu knife is a historic knife that was first fashioned by the people of the North. The Inuits, and other indigenous tribes, created it thousands of years ago. Interestingly it’s still used up to this day.

An Ulu knife has a unique shape. Unlike regular cutting tools and knives, the handle is right above the blade. It’s not an extension of the blade like the regular ones. This vertical placement focuses all of the pressure applied to it on the cutting point.

The blade is also curved, which gives the choice of a centered cut, or a rocking cutting action. The size of the blades ranges from 2 inches to 16 inches. The 6-inch blade is the most common one, and it’s believed to be a multipurpose knife as like swiss army knife.

In the olden days, the Ulu knife was used for tasks as diverse as cooking, hunting, building, sewing, and skinning. ( check out this article on best deer skinning knives )

Recently, Ulu knives found their way back to modern kitchens all around the world. They are easy to use, versatile, and they don’t require much effort to cut through hard materials. The slate blades are naturally replaced by stainless steel nowadays.

When Was the ULU Knife Invented?

Museums exhibit Ulu knives found dating back to 2500 BC. These tools were also called an Uluaq, and were intended as a “woman’s knife”. Cutting the hard bone from meat and thick skins of animals, was significantly easier with these knives.

The first Ulu knives were made from slate blades, with handles made from bone or wood. Ivory was occasionally used for the handles as well. The blades also evolved with the passing of time, where iron and copper replaced slate.

The Eskimo people seemed to take pride in these knives and treated them with reverence. They even passed them from one generation to the next.

Also known as the Inupiat knife, has a central part carved out of the blade, then the handle is fitted on it. This seems to give it extra strength and minimizes the need for applying glue.

The signature design of the Canadian Ulu knife is in the thin connection between the handle and the blade. There’s a slightly different model found in the same arctic area, where the blade is more pointed than the regular triangular variety.

The thin connection between the blade and handle could be seen in this knife as well. But unlike the Canadian Ulu knife, the West Greenlandic variety has a small handle and an oval blade.

This Ulu knife has a striking similarity to its neighbor, the West Greenlandic Ulu knife. They share the same general structure of the handle and slim connection to the blade. This blade, however, departs from the oval shape to a more rectangular look.

If you would like to try an Ulu knife, you can check out the Ulu Factory Alaskan Ulu Knife. It’ll certainly give you a glimpse of ancient times, and provide a versatile tool for your culinary creations.

The Ulu knife managed to survive for more than 5000 years, since the Eskimos crafted it, to our day and age. It’s a versatile tool that conserves energy and braves through hard materials with remarkable ease.